You can live with the FREE version of this app. In the Android Playstore, this is how the AccuBattery app looks like:

There is no reason to buy the “PRO” version of AccuBattery. I shall explain why.

What the FREE AccuBattery App is All About

The AccuBattery app provides a battery health monitor so that you can more easily plan your days: how far do you get with your smartphone. You would also better know in advance when you will need to change your smartphone’s battery.

I am now using the AccuBattery App for more than six months and I have learned more about Li-Ion batteries than with anything else before.

The AccuBattery people have somehow found a way to obtain real-time charge & discharge currents from the Android operating system kernel. This is not a straight-forward task. Check out the following two web links for more information on that
https://android.stackexchange.com/questions/145263/where-are-the-battery-capacity-files-located
and
https://groups.google.com/forum/m/#!topic/android-kernel/dpko8vF2bcc

Measuring the charging state of a battery is not an easy task and it will never be fully accurate. Different from a ceramic or a plate-type capacitor, a battery allows an internal electrical current to flow from one electrode through the electrolyte to the other electrode. This electrical current produces only heat but does not create an electrical charge to be stored in the battery upon charging nor can it be used to power an external electrical device. So, measuring the charge & discharge currents of the battery does not fully capture the entire picture of the charging state of the battery. The battery temperature and other environmental factors also play an important role.

This is where the engineering part of the AccuBattery app comes in: the app developers are using statistics in order to give you a more reliable idea of the internal state of your smartphone’s battery.  The longer you use AccuBattery, the more the app learns about the battery and the better it gets at analyzing your battery’s performance.

The AccuBattery people have put up an entire section on their webpage that explains in detail how they apply their method to estimate the charging state of a battery, here
https://accubattery.zendesk.com/hc/en-us

The AccuBattery App is Very Accurate

I found out that the AccuBattery app gives me total battery capacity values that are about 10% lower than those that I have measured with my USB charging cable. That sounds very reasonable to me, given that I always charge my smartphone until it shows a 100% charging level. That means that the charging current in the final time period of the charging cycle would only produce heat until my smartphone switches off the charging. I find that acceptable.

What I like very much in the AccuBattery app is that it gives me a historical overview of all my previous charge and discharge cycles, as follows 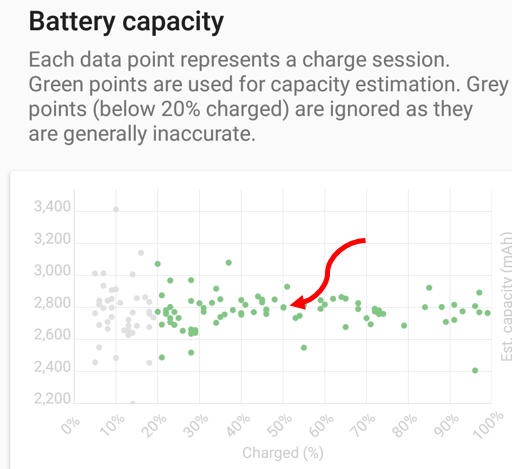 Now check out this graph closely in order to get a better idea on how that works. The AccuBattery app takes the “Charged %” information of the phone as one value of two, and the measured charging capacity (= amount of electrical energy = charging current * time) as the other value, plus an extrapolation step, in order to estimate a total charging capacity.

If you do this for a long time with a lot of measurements, you will obtain a narrow Gauss bell curve distribution that you can further evaluate. Leaving away those values of “below 20% actual charging” that lead to inaccurate estimations further increase the accuracy of your total charging capacity.

Being an engineer myself, I love this experiment and it has given me a lot of insight into charging batteries. This provides real-time statistics on the current charge performance and also on battery consumption, so I can see how much longer my battery can hold up for before needing to grab the charger.

By using the AccuBattery battery charge alarm feature, you can minimize battery wear and extend your battery lifespan.

I don’t use this AccuBattery battery charge alarm feature because the alarm sound is disturbing me.

You May or May Not want the Premium Version of AccuBattery

The premium version will cost you money, and if you only use the ongoing battery statistics you don’t need it.

However, if you plan to run the full set of smartphone battery experiments, I recommend upgrading to the AccuBattery Premium version, which is done via an in app purchase.

Once you have done that, all ads and all messages asking you to upgrade to the premium version will stop.

Then there is a “Stats overlay” feature which provides a live overlay over other running apps so you can see the battery current (shown bottom left) of your smartphone screen, see below 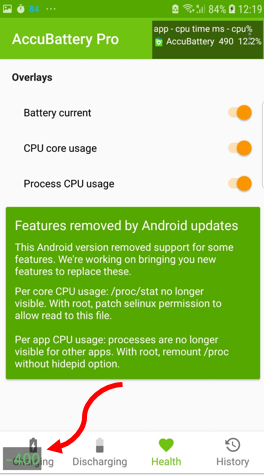 On some versions of the Android operating system, the AccuBattery app can also provide the CPU core usage (bottom right) of the screen, and the process CPU usage (top right) for the current app that is running in the foreground. This is handy for testing and benchmarking purposes: use it to quickly identify how much battery your newly installed app uses, test different settings and how they relate to your charging speed, or check whether an app’s battery saving mode actually works.

Grab your smartphone and download the Free AccuBattery app.

Then proceed to the “Settings” menu and there to the “Notification priority and status bar icon”. Disable the “Charge alarm” and “Charge alarm (DND)”.

Set a reminder for two months from now, so that you can check the battery status of your smartphone.