Is there any consequence to improper rejections, being reversed, re-opening prosecution, or generally being unreasonble and difficult? Surely the USPTO’s quality review program would be evaluating such actions.

The USPTO has put substantial efforts in addressing quality. Even the AIA legislation cited patent quality as one of its main drivers. During examination (the bulk of what the USPTO does), MPEP 1308.03 (Quality Review Program for Examined Patent Applications) describes the program (emphasis added):

The Office of Patent Quality Assurance administers a program for reviewing the quality of the examination of patent applications. The general purpose of the program is to improve patent quality and increase the likelihood of patents being found to be valid.

It should be stressed that the only reviewed applications, admittedly, are ones that are allowed. While this is at least theoretically relevant in identifying improper allowances, it does nothing to address improper rejections or other improper rejections that cause an applicant to abandon their application. The USPTO’s quality review program thus has no impact on the following elements (which seem highly relevant to patent examination quality:

One can see that to have a perfect quality record, all that is needed is to simply reject no matter what. Some readers have suggested that an examiner feels some pressure going to an appeal conference with a bad rejection. This anecdotal explanation has some draw, and there is the negative consequence of having to form a new rejection with no points if prosecution is re-opened. However, beyond this minor inconvenience, it is unclear of any real consequence. Further, if the supervisor or primary is supportive of maintaining bad rejections, an appeal conference will do nothing (as the examiner and supervisor/primary can always out-vote the third member).

Another internal quality review program by the USPTO is described as follows:

As part of the USPTO’s quality assurance efforts, each Technology Center (TC) has supervisors and TC reviewers who conduct numerous quality reviews of work products each year for evaluations of employee quality as well as to provide coaching and mentoring based on their findings. In addition to these TC reviews, the Office of Patent Quality Assurance (OPQA) audits a random sample of work products each fiscal year. The results from the OPQA random reviews are used to generate the USPTO’s statutory compliance measures

Looking to these random quality reviews, here is some data published by the USPTO for 2021. According to their own internal reviews, approximately 25% of actions have an improper (under at least one of 101, 102, 103, and 112) rejection. 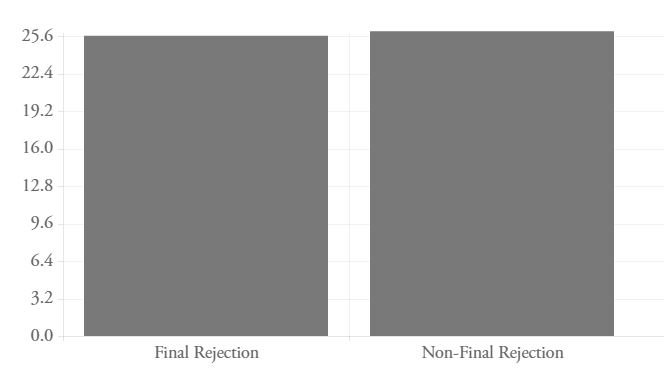 According to the USPTO, they conduct approximately 12,000 such random reviews per year. The data is used to provide “meaningful feedback to TC management and quality assurance specialists and facilitates the identification of quality trends, training opportunities, as well as an evaluation of recent training at the corps level and below.”

So perhaps if an examiner intent on rejecting and wearing an applicant down has one of their improper rejections randomly selected, they might possibly receive some coaching. Otherwise, it appears that they can restrict all they want (until an applicant successfully petitions, and even then the result is to do the work they should have done the first time), and they can improperly reject all they want where an applicant can be forced to enter an endless loop of appeal re-openings.

The situation reminds me of a (CORRECTION – early 90s) metal song by Ratt – Heads I Win, Tails You Lose.

Until there is true symmetric quality review on both sides (rejections and allowances), the idea of patent quality at the USPTO is an illusion.