You have surely seen my articles and posts about the Entrepreneurial Mindset. Yes, there are measurable personality traits that make it more likely for certain people to be successful entrepreneurs. That research resulted in me being named as a co-author in a presentation about how to apply this knowledge to employees, at the prestigious International Congress of Psychology (ICP), 2021, in Prague, Czech Republic (click here).

For the employees’ application, we have started with a hypothesis – based on the general data on psychopathy – according to which the two main facets of psychopathy also correlate negatively with well-being, and lo and behold, it only applies to secondary psychopathy. And NOT to primary psychopathy.

I am fully convinced that successful entrepreneurs need a high degree of primary psychopathy in order to be able to cope with various situations that entrepreneurs encounter on a daily basis, such as in the following picture 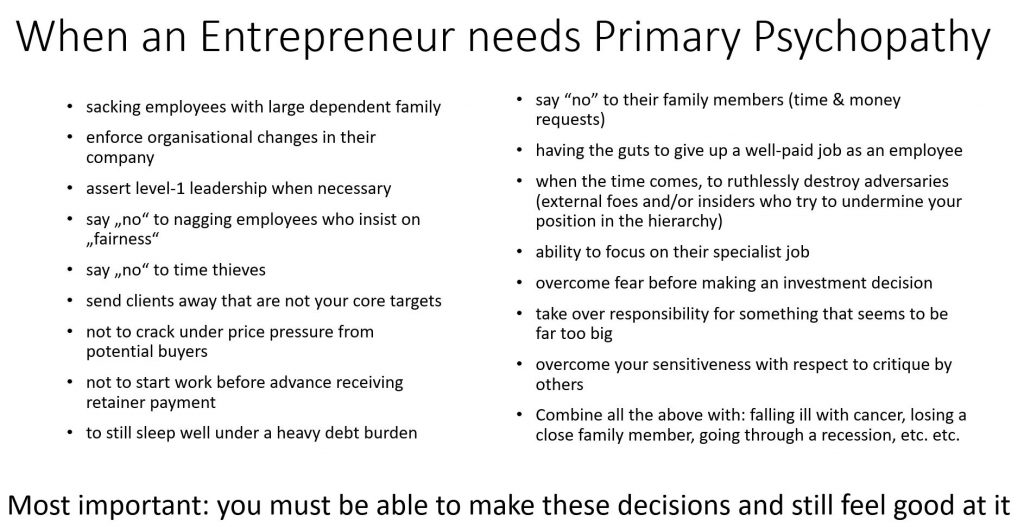 You have to be willing to sleep in your car and laugh about it. You have to be able to laugh at many things, because when you think of the worse things in the world that could happen to your company, they will happen.

Here is some scholarly backup for my position, by Akhtar, R., et al. in “Greed is good? Assessing the relationship between entrepreneurship and subclinical psychopathy. Personality and Individual Differences” (2012, click here) write the following

And if you want to do the Levenson test yourself, here is the FREE online version: https://openpsychometrics.org/tests/LSRP.php

Entrepreneurs and How to Train Secondary Psychopathy

I am fully convinced that successful entrepreneurs need a low to medium degree of secondary psychopathy in order to be able to successfully rake in new business from clients and to work together with successful employees.

And here comes the important point: while you cannot train primary psychopathy because it is engrained in the DNA, one can train secondary psychopathy. Some entrepreneurial success strategies follow the teachings of Tim Robbins by applying Neuro-Linguistic Programming (NLP), and they may or may not work. I prefer reading books when I can avoid taking courses.

The most important book that I am aware of for training one`s secondary psychopathy is “How to Win Friends & Influence People” by Dale Carnegie (click here).

A good and short review of “How to Win Friends & Influence People” is found here https://www.lewrockwell.com/2017/05/no_author/win-friends-influence-people/ and I recommend that you read it.

People with a high degree of primary psychopathy will find it in general difficult to apply the principles, except those in the Machiavellist sector of the Dark Triad personality area. That is because it is in the first place a book about salesmanship, and not about winning friends: the basic idea of Dale Carnegie is that you win friends and influence people in order to sell them something. This is often overlooked in practice: if someone has a high degree of primary psychopathy this someone will not easily make friends with others, and surely not if this someone is an introvert. And this will not change, even if this someone can train himself to a socially acceptable degree of good manners.

Carnegie wrote his book in the Great Depression because he saw that salesmen needed to gain insight in order to improve sales. His book is not a good book for learning how to run a business as an entrepreneur, it is a book on how to become a successful salesman. Please note that just like NLP, the “How to Win Friends & Influence People” can be used to manipulate people in ways that will be bad for them and good for the manipulator.

Another book that I recommend for cranking up secondary psychopathy numbers is “Pre-Suasion – A Revolutionary Way to Influence and Persuade” by Robert Cialdini (click here). Cialdini’s book is very different from Carnegie`s book. The difference between the goals of the two books is that Cialdino´s book is not based on the desire to get money out of people but his book is based on the desire to gain cooperation from people.

This is the core of Cialdini´s teaching: before you get to the element of persuasion, you have to begin a process of pre-suasion. You set up an environment that leads the person to respond more favorably to your offer than he would have responded, had you not set up the environment. The two elements “Thoughts” and “Trust” of the “TiTTA” marketing concept come to mind, and I have written about it earlier (click here).

Cialdini’s book teaches how to set up that environment, and how to do it such that the target does not perceive that he has been set up. Again, these techniques are so powerful that they can be misused. Dark Triad Machiavellists will appreciate that. And while these techniques are proven successful in the advertising industry, Cialdini did not write his book for this purpose. He is a scholar and not a businessman. What a waste.

There are many popular personality tests out there, such as the MBTI, “The Strength Finder”, just to name a few.

While these popular tests work nicely to a certain degree, they are never good for determining personality traits that can be compared among various persons.

Here are the results of two popular personality tests done on crystalknows.com, applied to two different people: N. and F. 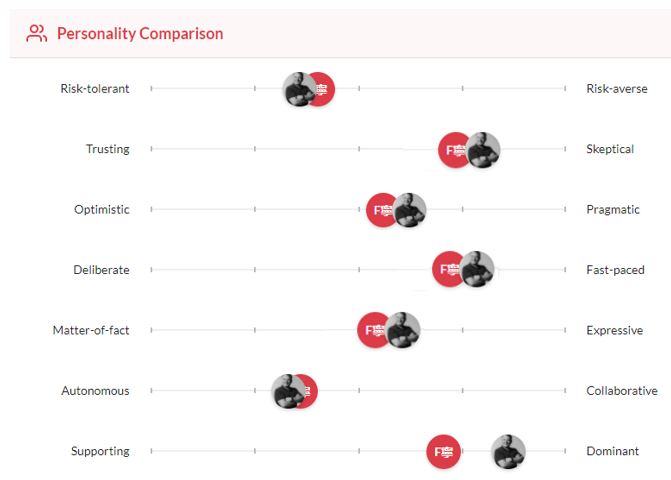 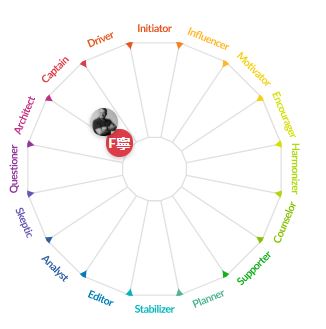 The two tests above seem to suggest that N. and F. have similar personalities, but they cannot be more different from each other when it comes to entrepreneurship. N. is a successful entrepreneur with a track record of 30+ years, while F. is a 38-years old computer scientist that gave up her shareholder position in a start-up, “because somehow it did not work out”.

Here are N.`s and F.`s Levenson test results (click here for taking the test yourself):

F.´s degree of secondary psychopathy is extremely low, while N. – from the outside – appears like a “normal” average human being when it comes to that personality trait.

F. is definitely not cut out for initiating and running a company, while N. is. I have tested over 200 individuals so far, and I can confirm that that the psychopathy values are indicative of that.

The above example tells you everything: don´t trust popular personality tests for predicting how a person will act. Go for the scholar tests instead, and learn how to interpret them yourself.

And the following scholar article seems to be quite accepted in the field (it comes with a neutral title and the authors are known):
Furnham A, Mouttafi J, Crump J. “The Relationship between the Revised NEO-Personality Inventory and the Myers-Briggs Type Indicator”, Social Behavior and Personality. 2003, 31(6), 577-584

I have given a lecture about entrepreneurs and psychopathy, on 30 October 2018, at the Nanyang Technical University (NTU) of  Singapore.

Here is the recorded lecture:

This is only an intermediate step in my investigations towards what makes successful innovators and entrepreneurs.

Enter the members-only discussion forum (click here), or email me at martin-schweiger@ip-lawyer.tools.com . You can be part of my book project and as an early contributor, you will get credited in the book. You will also receive a free copy when it is published, as well as all future upgrades. Bonus: if you aren’t a member already, you get 1-year membership to the ip-lawyer-tools.com community. You can then discuss your question in the forum (click here).